“A box without hinges, key, or lid, yet golden treasure inside is hid.” – J.R.R. Tolkien

Blockchain. Smart contracts. Tokenization. Buzzwords of the 21st century with promises of opportunities for golden treasure made accessible to the general population. However, beyond the immense hype built around them, these concepts still remain a mystery to many and unfamiliar territory to all.

Notably, in recent months a big topic that has arisen is the tokenization of funds. It is intended to leverage on blockchain technology to open up opportunities for ordinary retail investors which were previously not available with old, traditional markets or assets. This article seeks to explore what it is, how it works and the benefits of the tokenization of funds.

As a starting point, the key question to begin with is what tokenization is. Simply put, tokenization is the process whereby the ownership rights of an asset are converted into purely digital representations of such asset, which can then be subdivided, traded or stored on decentralized ledger technology (loosely referred to as “blockchain” for this article).

A token, in theory, can represent any asset type but typically fall within one of the following two categories: (1) token is native to the blockchain and have no physical presence (e.g., cryptocurrencies); or (2) token is not native to the blockchain and represent some form of real-world asset (e.g., shares). However, while they may represent a real-life asset, it should be noted that the token itself would not be regarded as an asset. Instead, they should be viewed more or less as an equivalent to that of a derivative or an option.

In the case of the tokenization of funds, the tokens fall within the second category as set out above. Tokenization takes old, traditional markets or assets and, using new blockchain technology, flashy new terms and acronyms, repackages them into derivatives or derivative contracts for a new market. By repackaging them into “smaller” bits, tokenization allows for a wide range of assets to become more affordable and liquid, opening up investment opportunities to ordinary retail investors that are otherwise not made available (see diagram below for illustration). 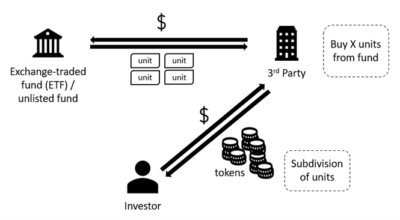 With traditional securities, for any book-entry securities, only the central security depository is empowered to update a central ledger and a single entity is responsible for recording all transaction histories. However, with the use of blockchain technology, all accounting and transfers of tokens are completely decentralized, and its ownership is validated, instead, by the multiple participants in that particular network (i.e., authorization and verification depend on the validation of matching both public and private keys on the blockchain to unlock the corresponding ownership rights). However, with the increased popularity of such tokenization, many jurisdictions have since incorporated various restrictions (e.g., know-your-customer, anti-money laundering, anti-cybercrime) and most tokenization platforms are not completely open anymore.

Benefits of Tokenization as an Investment Vehicle

Tokenization allows commercial parties to explore vast “greenfield” areas of opportunity that previously were not available with tradition markets or assets. In some ways, tokenization of funds can be seen to have the potential to revolutionise global financial services.

That is not to say that the tokenization of funds does not have its downfalls and a key area is that lack of comprehensive regulation in this area.

Briefly, “capital markets products” include any securities, units in a collective investment scheme, derivatives contracts and spot foreign exchange contracts for purposes of leveraged foreign exchange trading. In each case, the MAS will examine the structure and characteristics, together with the rights attached to, a digital token in determining if it is a type of capital markets products under the SFA.

If the tokens constitute capital markets products, a person may only make an offer of such tokens in compliance with the requirements under Part XIII of the SFA, which includes the requirements that the offer must be made in or accompanied by a prospectus that is prepared in accordance with the SFA and that is registered with the MAS, unless it falls under one of the exemptions. In addition, the MAS also regulates the intermediaries that facilitate offers or issues of tokens which constitute capital markets products:

In addition to these licensing requirements, it should be noted that there may also be anti-money laundering and counter financing of terrorism laws which apply in respect of activities in relation to digital tokens. Under the MAS’ Notice on Prevention of Money Laundering and Countering the Financing of Terrorism, an intermediary conducting one or more of the regulated activities under the SFA will subject to anti-money laundering and counter financing of terrorism requirements which, broadly, include:

It should be noted that, even if the tokens do not fall within the MAS’ regulatory purview, it may nonetheless be subject to other anti-money laundering or counter terrorism financing legislation such as the obligation to report suspicious transactions under section 39 of the Corruption, Drug Trafficking and Other Serious Crimes (Confiscation of Benefits) Act (Cap. 65A), or the prohibition from dealing with or providing financial services to designated individuals and entities pursuant to the Terrorism (Suppression of Financing) Act (Cap. 325). 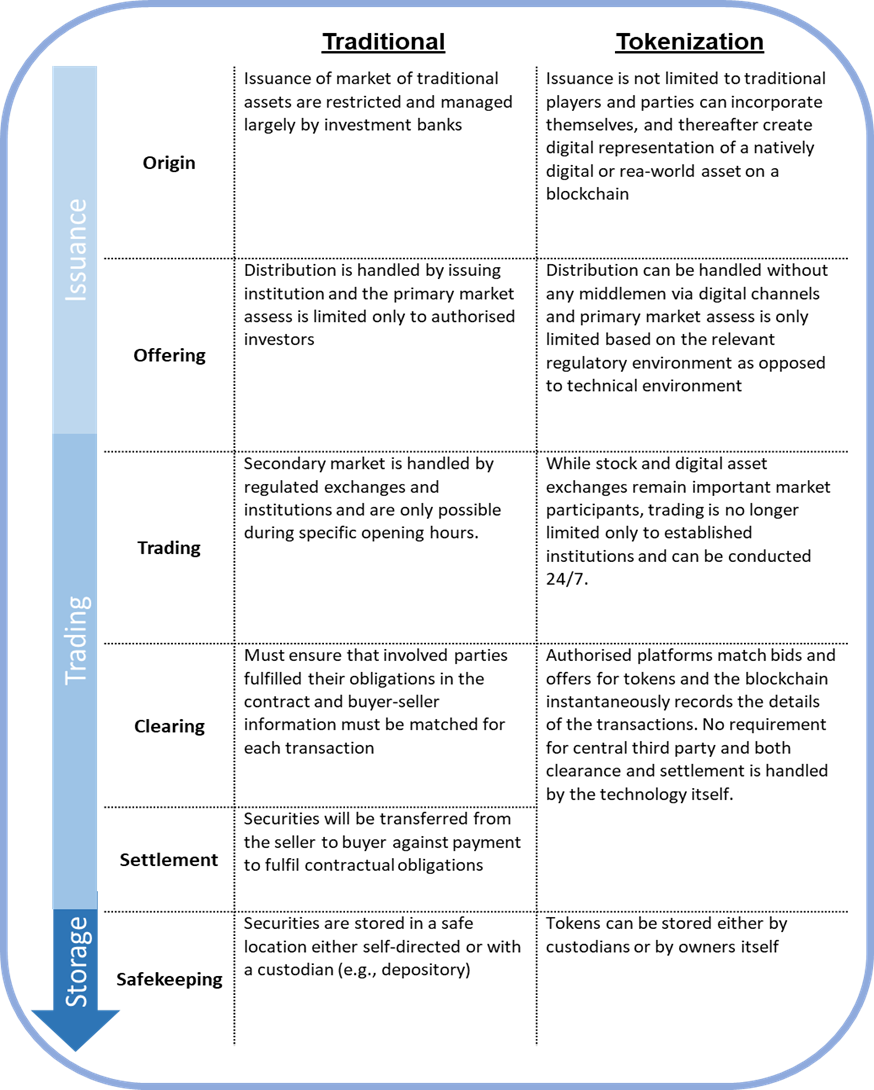 Will the tokenization of funds fulfil in its golden promises of golden treasure made accessible to the average retail investor? Having gone through the various aspects of tokenization, this ultimately remains up for debate. While it does sound appealing to open up such opportunities to a greater volume of people, only time will tell if this model of investment will be a sustainable one in the long run.

This article seeks to briefly introduce the tokenization of funds in a summarized and engaging manner and should not be construed as legal advice in any form or manner. For more information on this matter, please feel free to contact Ms Jennifer Chih and Ms Maria Chang.